You are here: Home / History of German Village

Everything You Need To Know About German Village (Columbus, Ohio)

Back in the 1840s, a large group of German immigrants settled in Columbus, Ohio. They fell in love with the land they settled and decided to stay. These German immigrants kept things for themselves and tried not to step on anyone’s toe.

But as the group grew, their name became more and more known to the people around them. These were industrious people, eager to open their business, schools, and churches in the land of opportunity. And you know what? They took this opportunity and built one of the most historic neighborhoods in the USA.

How It All Started

When the American Revolution ended, the US Congress felt the need to thank all those who fought for the Colonial cause. And since they couldn’t give away gold or currency, the gave away the only thing they could; land, lots of it!

Then a guy by the name of John McGowan claimed roughly 330 acres of what we now know as German Village. But what John didn’t establish the Village on his own. As new immigrants arrived, he began to sell portions of the land to them, which made him the first German Village real estate agent.

The Village snowballed over the next decade, and by the end of 1815, it already had a statehouse. The settlement (which was then referred to as The Old South End) grew steadily over the next 15 years, developing business and building new homes. And then 1830 arrived…

German Village experienced a massive influx of German immigrants in 1830. These very all industrious and hardworking people, who came to America with the hope that they’ll able to found their families, build their homes and feed their children; and so they did! Actually, these immigrants did a lot more than that!

For starters, most of them fought in the American Civil War, which was most welcomed by other Americans. And since they felt welcome, more and more Germans decided to cross the Ocean and join the newly founded German settlement, insomuch that Germans constituted one-third of Columbus’s population by the end of the 1870s.

It’s needless to say that the newly founded settlement was booming. Businesses of all kinds started popping up; stonecutters, tailors, barber shops, boutiques, bars, etc. They also tended about the spiritual side of humans, and thus they opened schools and churches. In fact, the St. Mary’s Catholic Church was built by these German immigrants.

In short, the settlement was flourishing. People were modest and hardworking, highly social and emphatic. But there was one problem brewing across the Ocean, one that had nothing to do with the German immigrants that boarded ships and settled in the German Village; the WW I was on the horizon.

WW I halted German Village development quite substantially. Why? Well, the WW I was started by the Austro-Hungarian Empire, a close ally of Germany. There was an assassination in Sarajevo; things got messy, and people started pointing fingers at each other. When they realized that finger pointing got them nowhere, they began pointing guns and, consequently, WW I.

Now, the only connection between German Village immigrants and German soldiers was their nomen. However, that didn’t stop people from accusing and badmouthing American Germans and their contribution to the USA. It is also fascinating how people quickly forgot the fact that these Germans fought for the American Revolution and American Civil War.

German culture was banned btw! Books, schools, teachings; all of it. Of course, media played a massive part in it, but we won’t go into it right now. Let’s just say that people took it to the extreme; one night, they gathered in front of the Schiller Statue and burned German books as a sign of revolt. They even killed German dogs… Well, it’s needless to say that the WW I was a rough time for German Village.

If you are intereste din learning more about how the modern Schiller Park came to be, you may enjoy reading about The History of Schiller Park

And just when you thought the things couldn’t get any worse, the Prohibition occurred. Now, some of you probably know that beer plays a significant role in German culture. When Prohibition happened, many American Germans had to close their breweries, which significantly damaged the economy of German Village.

We should also point out that the significant parts of the Village were turned included into the USA war machine. To be fair, German Village wasn’t the only neighborhood to experience this trouble; it was WW II, and the USA needed all the resources it could get to manufacture tanks, guns, and other war equipment.

The government confiscated iron fences and trolley tracks and turned the entire South end of the neighborhood into a manufacturing zone. Many people moved out because the district started to look more like an industrial zone rather than a residential area.

When the war ended, much of the German Village was gone, abandoned and eroded, turned into a slum. Things were so bad that the city council decided to destroy roughly one-third of the neighborhood.

The Birth Of German Village

And just when it seemed that all hope was lost, a guy by the name of Frank Fetch showed up. Bear in mind that he didn’t just show up; he saw potential in those slums and decided to buy a house, with the goal of rebuilding the German Village.

For the second time in its history, German Village received a lot of praise, fame and most importantly, people! These people were also very concerned about the Village’s historical value, which is why they established a German Village Commision. In essence, the GVC had and still has the full autonomy over the buildings and manages their outer appeal and restoration process.

German Village had a very rough history, but its culture and architecture survived. Most people know it for its red-bricked houses, paved streets and iron fences. Keep in mind that the neighborhood also has a great real estate value.

In 2007, the White House added German Village to the list of Preserve America Community, thus showing that Washington does care about the future of German Village.

Its houses are sturdy, constructed in linear plots and positioned side by side. Most of the neighborhood is residential, with some areas dedicated for manufacturing and commercial purposes. The neighborhood also boasts plenty of notable business and cultural buildings, such as the Great Southern Hotel, the Franklin Art Glass Studios Inc, and most notably, the German Village Guest House.

Culturally, the neighborhood celebrates both German and American events, but the Oktoberfest is by far the most popular one. And even though the event was canceled back in 2009, the event kept happening, and people kept drinking!

German Village is one of the most popular Columbus neighborhoods. It is diverse, has little to no crime and is excellent for young families. It also boasts great nightlife and is fantastic for people that enjoy outdoor activities.

Now, the housing might be a bit tricky, due to limited offerings and high prices, which is why you’ll need a professional and preferably a native German Village real estate agent to help you find an adequate real estate. With a bit of luck and knowledge, you’ll find something for yourself, and once you do, you’ll finally be able to experience German Village to its fullest! 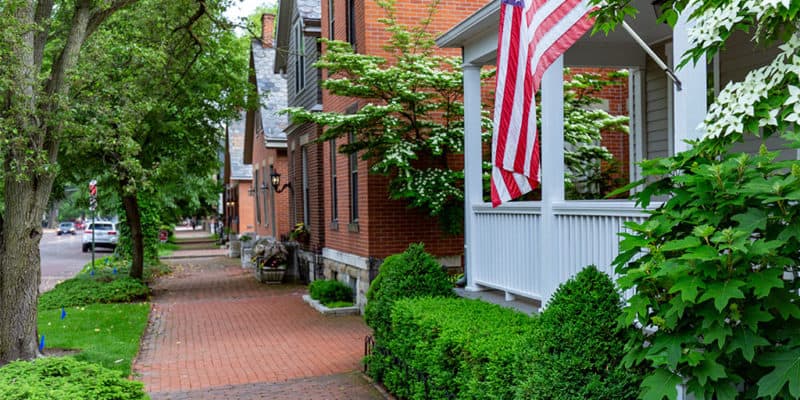